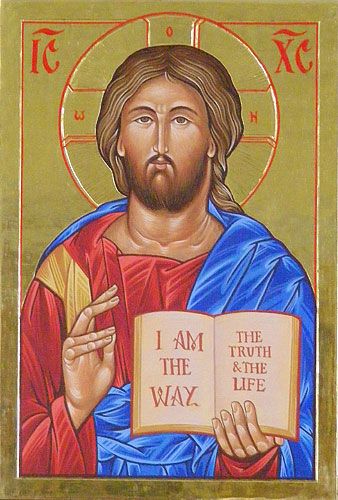 When I worked as a hospital chaplain, there was a period of a couple of weeks when the prayer room used by Muslim patients and staff was out of action while it was being renovated. During that time, we agreed that space would be made at the back of the chapel, which was just next door, for Muslims to use for prayer, with an appropriate indication of the direction of prayer. This arrangement went pretty smoothly and I must say that I felt that there was something very precious in celebrating mass at the altar in the chapel while Muslim colleagues prayed in the same space. Each group was directing its prayer towards God in its accustomed way, side-by-side, respectfully making space for each other.

The one objection I saw to this arrangement came in a fairly low-key, yet pointed form. Someone had left an open bible next to the area set aside for Muslim prayers and it was open at today’s Gospel passage, indicating the words; ‘I am the way, the truth and life; no one comes to the Father, but by me.’ The objector had, presumably, read this text in a way it has often been read – as a claim to Christian exclusivity, a monopoly on truth possessed by those who sign up to its propositions. In its more generous form, this kind of exclusive claim might be made with a degree of humility, but it often comes with a kind of self-satisfaction in having backed the winning side. This kind of thinking depends on an understanding of truth as a static body of thought, a coherent and immutable system requiring our assent. Those who withhold assent are outside the system and therefore do not gain its prize – access to the Father.

I recognise that I have put this position rather starkly and don’t mean to belittle those who hold to it. As I said, many who hold an exclusivist position on Christianity’s place in relation to other religious paths do so with humility and with a genuine desire for the wellbeing and eternal salvation of those who differ from them. But I fear that this position does not represent well what Jesus was saying. I fear that it diminishes something rather central to Jesus’ teaching.

Last week, we heard Jesus describing himself as the door to the sheepfold and I suggested that we might see this image in terms of thresholds where a life-giving encounter takes place. And in this chapter of John’s gospel, we have a similar kind of image. The first of Jesus’ words to describe himself is as a ‘way’, a path, and I think the next two rather depend on how we understand this. In speaking of himself in this way, Jesus says that the life-giving truth he embodies is personal, and that it is dynamic. His way to true life does not reside in a system of thought, but is embodied in himself, in the way he lived his life, in the way he approached his death, in the way his death was no defeat but a pathway to fuller life. The way he lived his life was to empty himself of all but love – a dying to self that is the only route to full life. And it is dynamic because it is a way that is only revealed by walking it. Truth unfolds as we go along. The Christian life, I think, is not so much something that we adopt as a metaphysical lens through which we then interpret the world, but nothing other than the very living of our lives in the pattern of Jesus’ life – in his way. Don’t get me wrong – I’m quite partial to a bit of metaphysics, but the Christian life is so much more than that.

There’s a wonderful Spanish pilgrim’s palindrome that goes ‘la ruta nos aporto otro paso natural’ – the path provides the natural next step. So if Christ offers himself as a way and calls us to walk in it, then the first, last and constant thing we must do is go. The resurrection accounts are full of this: go to the tomb, go to Galilee, go on the road to Emmaus and go back again, go out into the lake. Encounters with the renewed life of the risen Christ only happen when we get up and go, and that going will always entail a going to a place we don’t yet know. Jesus is met on the way. You see how far this is from seeing Christ as a static body of truth over which we might gain some mastery? The Christian life always entails a fairly substantial helping of not knowing. The other word for that is faith.

We are living through a time when everyone wants to know what’s next for us – when will the lockdown end; when will we have a vaccine; when will we get back to church? And there’s no shortage of people happy to speculate answers. People are also asking important and difficult questions about the future of our economic and political life, the future shape of our church life, the future of our relationship with the planet. However, anxious speculation can have a paralysing effect on us. Jesus said; ‘let not your hearts be troubled.’ We cannot know the future but we can choose to live the future we would want to see right now. It seems to me that Jesus invites us to live life without certainty, but to live it anyway, and to do so in the way that he did; generously, selflessly, gratefully, trustingly.

One thought on “Sermon for Easter 5”