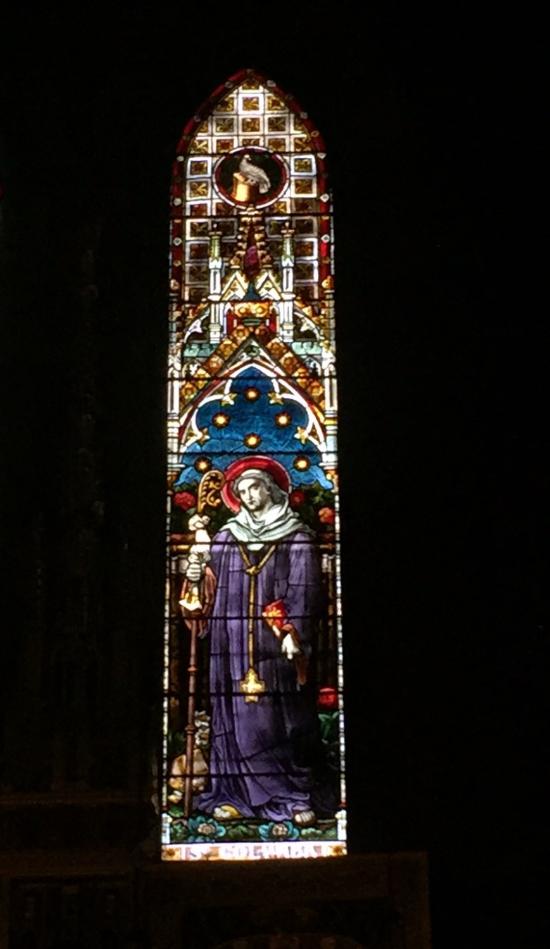 It may surprise you to learn that Thomas Merton had a bit of an interest in St Columba, though anyone who reads Merton will not be surprised that he might have picked up a copy of Adomnan’s Life of the saint (in Latin, of course) and will be even less surprised that he committed his thoughts to paper. Here’s the entry in his journal in full. It’s from the 12th of July 1964 (Dancing in the Water of Life p. 126):

Deeply moved by Adamnan’s life of St. Columba. A poetic work, full of powerful symbols, indescribably rich. Through the Latin (which is deceptive – and strange too) appears a completely non-Latin genius, and the prophecies and miracles are not signs of authority but signs of life, i.e., not signs of power conferred on a designated representative (juridically) – a “delegated” power from outside nature, but a sacramental power of a man of God who sees the divine in God’s creation. Then the miracles etc. are words of life spoken in the midst of life, not words breaking into life and silencing it, making it irrelevant, by the decree of absolute authority (replacing the authority of life which life has from its Creator).

Merton offers a really interesting take on sacramentality here, not as something external to creation but intrinsic to it, brought to light by those who have the purity of heart to see it. The miracles in the Life are truly fascinating and many are are deeply practical – a misplaced staff finds its way to its owner, the wind helpfully blows in two different directions to speed two monks on their separate ways, inedible fruit made sweet, protection from plague in places where his monasteries were founded. His intimate relationship with the creation was not all peaceful – he was happy for a charging wild boar to be struck dead, killed ‘by the power of his terrible word’ – but on the whole, the miracles associated with the saint are harmonious. I particularly like the story of a knife blessed by the saint which could do no harm to human or beast.

The other feature of Adomnan’s Life that particularly catches my attention is that holiness is indicated by luminosity, with light shining from the saint as a child, later as a priest ‘consecrating the holy oblation’ at the altar and shortly before his death. In this respect, as in many others in this account, we are reminded of the closeness of Columba’s mystical experiences with those of the desert monastics in Egypt (Admonan’s Life has a few deliberate echoes of Evagrius’ Latin version of St. Athanasius’ Life of St. Anthony).

Without trying to say too much about a supposed ‘Celtic’ nature-mysticism, and certainly avoiding any Celtic exceptionalism, I think Merton is right in identifying a more integrated view of how human beings are located in God’s creation than we often assume to be present in Christian theology. Holy lives are marked by the radiant transfiguration that is God’s telos for all creation, not by ‘dominion’ over that creation.

‘All monks, as is well known, are unmarried, and hermits more unmarried than the rest of them … One might say that I had decided to marry the silence of the forest. The sweet dark warmth of the whole world will have to be my wife. Out of the heart of that dark warmth comes the secret that is only heard in silence, but it is the root of all the secrets that are whispered by all the lovers in their beds all over the world. So perhaps I have an obligation to preserve the stillness, the silence, the poverty, the virginal point of pure nothingness which is at the center of all other loves.’

So wrote Thomas Merton in his ‘Day of a Stranger’, which was a short piece he wrote in response to a question about what his day was like in his hermitage in the woods above the Abbey of Gethsemani. I’ve drawn much inspiration from this passage over the years and today one phrase stood out for me for the first time: ‘the sweet dark warmth of the whole world‘. He sees the whole world in the little patch of forest that is his home and he finds the centre of that world in a still point of pure nothingness. Every place, every person, is a microcosm and an instance of the whole. And at the heart of each microcosm is that point of utter simplicity. It is the same point in each of us – we are connected by that vast, spacious sea of silence which Merton describes as the centre of all other loves. Love is the space we create to receive the other.

As we find ourselves forced to make a physical space between ourselves and others, we might find a way to nurture that inner space which connects us. Alone in our homes in this time of ‘social distancing’, we are no less present to the whole world, and it to us. And I don’t mean the ‘running commentary’ of global 24 hour news but the much deeper-running current of stillness that is our true point of contact with all that is.

‘What I wear is pants. What I do is live. How I pray is breathe.’

When Thomas Merton was approaching the beginning of his permanent move to the hermitage in the grounds of Gethsemani Abbey where he would spend the last short years of his life, he wrote the following words:

The ‘work of the cell’ is attention. What this means is not only attention to inner grace but to external reality and to one’s self as a completely integrated part of that reality. Hence, this implies also a forgetfulness of oneself as totally apart from outer objects, standing back from outer objects; it demands an integration of one’s own life in the stream of natural and human and cultural life of the moment. [A Vow of Conversation, June 8 1965]

The call of the Christian in today’s world, then, is a call to integrate all of life in the life of faith. Indeed, I would go further: it is to see that there is no kind of separation at all between the life of faith and the life of the world. Merton’s words here show something of his debt to Zen Buddhism in his insistence that there is no distance between self and what, illusorily, we imagine to be ‘outer’. I think he took the rest of his life (and beyond) to work out the full implications of his own words and I am not convinced that most Christians today have yet fully joined in sharing his insight.

We don’t gain this insight from the intellectual work of theology but from the ascetical practice of giving attention. It is as if we should see on every street corner a deacon proclaiming the invitation of Orthodox Liturgy – ‘Wisdom! Let us attend!’