Today I want to shamelessly steal some words by the great prophet of dialogue, Raimon Panikkar. These words preface his collection of essays on ‘The Intrareligious Dialogue’ and are a sort of ‘sermon on the mount’ for those undertaking such dialogue. However, they stand on their own as deep wisdom for all who seek an authentic religious path in our complex and multi-religious world. He uses the word ‘intrareligious’ in recognition of the common impulses and instincts we find with the ‘thou’ who is our partner in dialogue.

When you enter into an intrareligious dialogue, do not think beforehand what you have to believe.
When you witness to your faith, do not defend yourself or your vested interests, sacred as they may appear to you. Do like the birds in the skies: they sing and fly and do not defend their music or their beauty.
When you dialogue with somebody, look at your partner as a revelatory experience, as you would- and should – look at the lilies in the field.
When you engage in intrareligious dialogue, try first to remove the beam in your own eye before removing the speck in the eye of your neighbour.
Blessed are you when you do not feel self-sufficient when in dialogue.
Blessed are you when you trust the other because you trust in Me.
Blessed are you when you face misunderstandings from your own community or others for the sake of your fidelity to Truth.
Blessed are you when you do not give up on tour convictions, and yet you do not set them up as absolute norms.
Woe unto you, you theologians and academicians, when you dismiss what others say because you find it embarrassing or not sufficiently learned.
Woe unto you, you practitioners of religions, when you do no listen to the cries of the little ones.
Woe unto you, you religious authorities, because you prevent change and (re)conversion.
Woe unto you, religious people, because you monopolise religion and stifle the Spirit, which blows where and how she wills.

In the Christian West, our most central devotional image, that of the crucified Christ, usually carries two major resonances. One is theological: it represents the salvation of the world through the loving self-offering of the Saviour in his victory over death. The other, more devotional resonance is of the suffering of Jesus and most representations of the crucifix have this character – the suffering of Jesus is shown powerfully and graphically as he bears in his own tortured body the suffering of the world. However, this emphasis is surprisingly late in Christian art. It is really only from the 13th century or so that we see Christ depicted more consciously in his suffering. Until then, his image was not one of pain but of victory, even to the extent of showing him crucified as a king.

Perhaps the most famous example of this earlier form is the crucifix before which St Francis heard his call to rebuild the church, which hung in the church of San Damiano. This powerful image can still be seen in the Basilica of St Clare in Assisi.

It is surprisingly large, almost 2 metres tall, and is rich in symbolism and narrative. The art shows strong influences from the Christian East and shows how close the iconographic traditions of the churches were at that time. Incidentally, this tradition has been revived in the icon painting of the ecumenical community at Bose in Italy. But I don’t want to get distracted into art history because my purpose in sharing this profound image is a spiritual one.

I have often felt that it is a pity that Christian art does not have an equivalent of the Buddhist iconography of the Buddha Shakyamuni in meditation. Jesus is shown teaching, healing, at supper with his disciples, on the cross, risen, but only very rarely at prayer. Given how often the Gospels refer to his withdrawal by himself to pray, this is surprising. But in revisiting this image, which has held a very important place in my own spiritual journey for about three decades, I has struck me with a great force that this is the supreme image of Jesus in meditation! The Jesus who emptied himself and took the form of a slave is here depicted in that boundless and loving emptiness. Stripped of all outward embellishment, he stands erect, open-eyed, open-armed, serene, united with the Father and with all of life, not in suffering but transcending suffering. This is Jesus-Sunyata: having let go of all things, even life itself, he fills all things with his boundlessness. This is the-one-who-does-not-cling (Phil 2:6) and is therefore open to all in unbounded compassion. This is how he saves – not through some legal-theological process, but by the utter poverty of self-emptying love. Suffering and violence are transcended by the complete renunciation of the savage system of blame and revenge that can sometimes pass for justice, and peace is realised through the courage to enter the unknowable void of egolessness.

The Seed has fallen into the ground and has died. It has let go of life that Life might flower.

I think it is fair to say that Bede Griffiths was one of the 20th century’s most notable religious pioneers, a true adventurer in the deepest realms of human existence. The experimental monastic community in Tamil Nadu he inherited from his spiritual forebears, Jules Monchanin and Abhishiktananda, combined the life of a Hindu Ashram with Benedictine monasticism but this was not only an experiment in the external aspects of inculturation. What Bede sought to embody was the true coming together of religions in his own person. His goal was the reconciliation of opposites in advaita, non-dualism, a profound level of unity in which all things are held together. In part, he was motivated by what he saw as an excessive reliance in the West on rational processes and their resulting technologies. Ever since an early experiment in simple communal living with two friends in the 1930s, Bede shunned many of the products of industrial activity. Indeed, when he entered Prinknash Monastery shortly after that experiment, he was appalled by the comforts of a monastic life that was considered by many to be exacting! He felt deeply that Westerners, Christians included, had lost touch with the fullness of human life, losing confidence in the darker and intuitive aspects of the human psyche in favour of control and reason.

Bede went to India to find ‘the other half of his soul’ and this journey, a life’s journey, was one of unifying feminine and masculine, ordered and spontaneous, light and dark, intimate and self-contained aspects of his person. In religious terms, he insisted on using texts and symbols from other religions in the Ashram’s liturgies. One of the most potent of these symbols was the cross outside the Temple at Shantivanam:

The use of the sacred syllable, Om, in the middle of a Christian cross aroused anger from conservative Hindus and Christians. And, despite Bede’s unstinting commitment to welcome all who came, some found this desire to embrace all religions as fundamentally expressing one great Truth to be completely unacceptable. Bede dealt with considerable levels of conflict in his life and I suppose this is inevitable for those who try to hold ‘opposites’ together in their own person. For those whose faith is ‘this and this only – never that‘, Bede’s insistence on true faith as always residing in ‘this-with-that’ poses a deeply uncomfortable threat.

For Christians in particular, Bede’s exploration of non-dualism asks hard questions of traditional Christian polarities such as evil-good, law-gospel, dark-light, human-divine, death-life, creator-creature. Do these melt away into an indistinct singularity? I think Bede’s answer would be that distinctions remain, but in constant relationship, in ultimate unity and sometimes in painful tension. To use a phrase from Teilhard, ‘union differentiates’. All the same, the truest reality, the reality we call God, is one. This means that human fulfillment is found in the unity of opposites, the reconciliation of contradictions and the fearless of embrace of paradox. 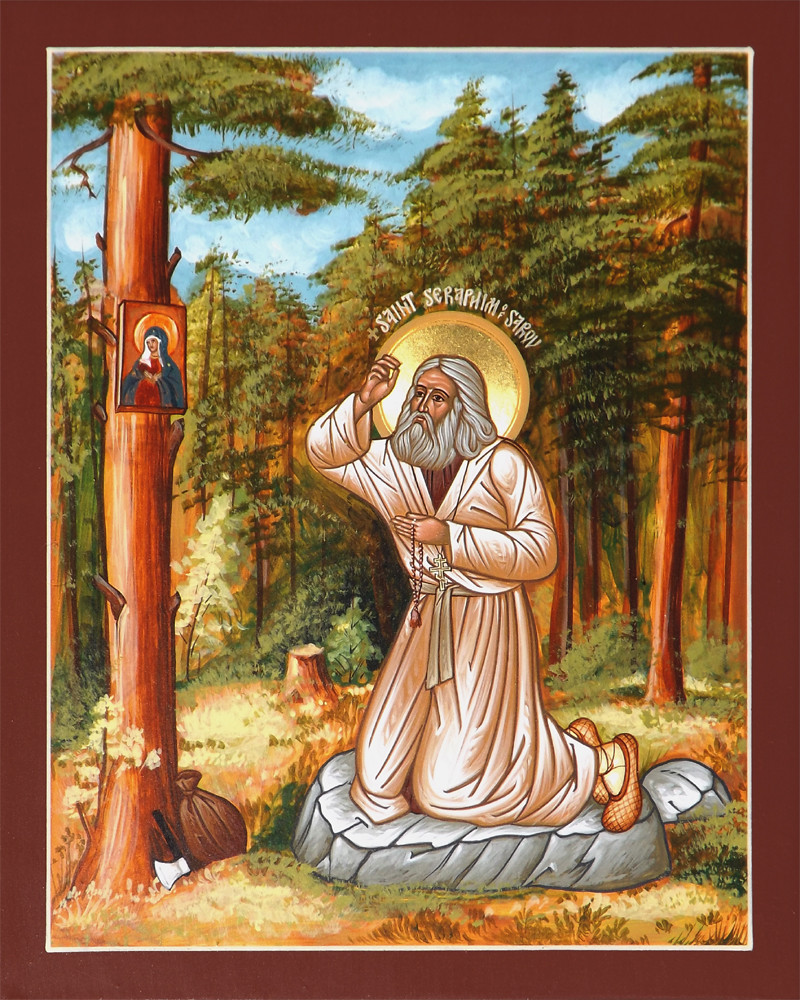 One of the most extraordinary testimonies of spiritual encounter in the Eastern Christian tradition is Nicholas Motovilov’s meeting with St Seraphim in the forest near Sarov in November 1831. Famously, this dialogue between the staretz and his disciple culminates in an experience of divine light, radiating from both men as they are filled with warmth, peace and calm. But in the course of their conversation, Motovilov records some remarkable words from Seraphim about the practice of prayer. In speaking about the mystical gift of stillness, he says:

Many explain that this stillness refers only to worldly matters; in other words, that during prayerful converse with God you must ‘be still’ with regard to worldly affairs. But I will tell yo in the name of God that not only is it necessary to be dead to them at prayer, but when by the omnipotent power of faith and prayer our Lord God the Holy Spirit condescends to visit us, and comes to us in the plenitude of His unutterable goodness, we must be dead to prayer too.

This last phrase is one of the most startling expressions of apophatic theology in Christian tradition, but it is entirely in keeping with the experience of many that it is only in letting  go of what we think of as prayer that we truly enter the fullness of divine reality. No words, no images, no thoughts, no intent of gain, no technique, no activity, only complete stillness of body and mind and a radical emptiness or openness.

It is very hard indeed for us to ‘do nothing’ in prayer. We want to be in control, to have an outcome and to feel that we have accomplished something. And surely when the world is in a big mess, the impulse to ‘do something’ is even greater. Paradoxically, however, the act of radical letting go that is true prayer is the only way to turn our own hearts from the dangerous notion of an isolated self and to realise the fundamental connectedness of all things. We let go of the idea that I am here, you are there, God is somewhere else and prayer is some kind of negotiation between these separate loci. Without such a metanoia, we remain the realm of oppositions, a realm that too easily becomes a power struggle. In prayer – in giving up prayer – we let go of all such notions of power over-against another and open ourselves to compassion. Christ Jesus, ‘who emptied himself, taking the form of a slave’ showed us the way and invites us to do the same. One simple way to train ourselves in such a demanding way of life is to give up our notions of prayer in order truly to pray in the utter stillness of compassion and trust.