I apologise that this post is nothing like as racy as the menage-a-trois sounding title might imply. It’s really a reflection on a phenomenon that has been occupying my thoughts and studies rather a lot recently, and it is the notion of ‘dual belonging’ in religious life. I part, this stems from my research into the writings of the Irish Jesuit William Johnston, whose own interaction with Zen Buddhism was complex and did not lead him to the position where he could in any way embrace a multiplicity of religious identities. For him, the reason was not polemical or judgmental – he simply couldn’t see a way to let go of his primary calling to a spiritual path that was Christian, formed by many centuries of contemplative experience, an experience which he sought deeply in his own life. He felt the same kind of loyalty to one path in his Zen Buddhist friends, for whom loyalty to a teacher, as well as more primary loyalties to the Buddha, the Dharma and the Sangha, was fundamental. Nonetheless, his Christianity was deeply shaped by his ongoing dialogue with Buddhism to the extent that he regarded such dialogue as utterly essential.

But many of Johnston’s friends and followers took a different path, one that wholeheartedly, if not always straightforwardly, embraced the practices and insights of Christianity and Buddhism. Robert Kennedy, another Jesuit, writes powerfully of this blending of insights in his books, of which ‘Zen Gifts to Christians‘ is an excellent example. He describes there how Johnston led him round many Zen temples in Japan in search of wisdom and spiritual rejuvenation. 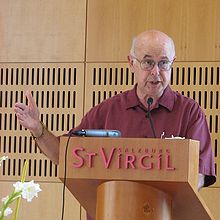 Looking to another exemplar, Paul Knitter is more reflective on the nature of this dual belonging. Knitter was a Catholic priest and has spent his life teaching theology. He also practises Dzogchen Buddhism and has written extensively on inter-religious matters. He used to describe himself as a Buddhist Christian, but now finds it impossible to separate these identities or give one of them priority. He talks of how some ‘dual belongers’ are Christian for one half of the week and Buddhist for the other, some clearly identify a primary belonging, some are simply uncertain about how these two streams interact. Knitter has a particularly interesting way of describing how it is for him (at least, it’s interesting to theology nerds like me…). He uses the Chalcedonian language about the two natures of Christ to talk about how his own ‘two natures’ interact – constantly influencing each other, constantly moving, but completely united. For him, there can be no division, no dualism between the ‘wisdom’ emphasis of Buddhism and the ‘love’ emphasis of Christianity. On a practical level, this means that he also participates both in Christian liturgy and prayer, and Buddhist ritual and meditation, though he brings all of his experience to each. So he hears Christian sermons through Buddhist ears and meditates as a Buddhist conscious of the divine presence. He describes quite movingly how, for him, ‘Buddhism provides the ontology and Christianity provides the particularity. Buddha makes clear what is going on. Christ shows how it goes on.’

For many Christians, this poses severe problems as it challenges both Christianity’s claim to exclusive truth and the believer’s secure place among the elect. Is this ‘dual belonging’ not simply a loss of nerve in the face of declining Christian influence in the West? Is it simply a giving in to the lure of the mystic East, not recongising the treasures of one’s own tradition in the area of mystical wisdom and loving contemplation? I don’t think so. I see this phenomenon as being a genuine fruit of encounter between faiths and I would not want to dismiss it any more than I would want to dismiss Johnston’s choice to adhere to his one Christian way. These dual belongers offer a particular kind of challenge to religious people to see beyond their tribal loyalties and place the faithful practice of spiritual awakening at the heart of all that they do. They embody the urgency of dialogue in their own person and urge us all to see beyond limited horizons. Their approach also embodies a deep spiritual truth, which is that there is no spiritual growth without loosening our grip on the things we imagine to be essential or, as Jesus put it, no gaining of life without the willingness to lose it.

One thought on “I belong to you (two)”