Thomas Merton wrote comparatively little about the events of Holy Week or, indeed, about the Cross. His spirituality was of a more ‘cosmic’ nature, though firmly rooted in human experience as well as in traditional Christian theological categories. But here is one little reflection that mentions the Cross in his characteristic style. It comes from his extended meditation, Day of a Stranger, which describes a ‘typical’ day in his hermitage:

One might say I had decided to marry the silence of the forest. The sweet dark warmth of the whole world will have to be my wife. Out of the heart of that dark warmth comes the secret that is heard only in silence, but it is the root of all the secrets that are whispered be all the lovers in their beds all over the world. So perhaps I have an obligation to preserve the stillness, the silence, the poverty, the virginal point of pure nothingness which is at the center of all other loves. I attempt to cultivate this plant without comment in the middle of the night and water it with psalms and prophecies in silence. It becomes the most rare of all the trees in the garden, at once the primordial paradise tree, the axis mundi, the cosmic axle, and the Cross. Nulla silva talem profert. There is only one such tree. It cannot be multiplied. It is not interesting. 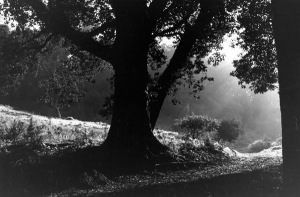 The Latin quotation in the piece is from Fortunatus’ hymn, Pange Lingua, which hails the wood of the cross as being without compare. The contemplative depth of Merton’s reflection here is extraordinary and needs a little unpacking. I think it reflects his engagement with Buddhism in his suggestion that the ‘point of pure nothingness’ is one – that is, something akin to the Buddha-consciousness or to sunyata – and that it is ‘uninteresting’ – that is, not an object for speculation or analysis but a pure simplicity of being. It is also profoundly Christian in its presentation of the Cross as a cosmic reality. He draws on that ancient tradition of the tree of the garden of Eden being the tree from which the wood of the cross would be taken – paradise is restored in the self-giving of the Christ. And he is clear that our way to engage with this reality is to enter silence in love. This is no retreat from the world, as all the world is contained in this apprehension of reality, and Merton’s engagement with the wider world, its peace, its creativity, its contradictions is highly visible in this essay.

Merton may not dwell much on the drama of Holy Week in his writings, but his contemplative consciousness would be unthinkable if it had not been formed in the shadow of this one tree.

One thought on “Only One Such Tree”